You are here: Home / Creativity / Mountains, Churches and Galleries 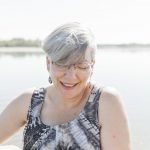 Five days after my CD release party I headed out for a ten day trip/short tour. I had no idea how it would really go but I was counting on friends and family to help as I moved through a couple provinces. I had a second CD release party in Shaunavon at a local gallery. A group of twenty fit into the small gallery and it was lovely. I felt grounded in this space and I could feel my songs being absorbed by the audience. One person said she felt like she had heard an evening of poetry put to song. This is one of the highest compliments that I have gotten for my music.

I headed to Canmore the next day for a couple days of rest. I did rest which was much needed after the months of busyness since May. As the trip continued, I played in Vernon, Kelowna, and Calgary. The theme that was arising was meeting with old friends, some whom I hadn’t seen for thirty years. All knew my passion for music. I was so moved. My month continued with a trip to Montreal to visit family and have a house concert. Old friends whom I’ve known since the mid-eighties showed up in Montreal. In Saskatoon another friend from high school came to my show there. My father quite rightly said, ‘You know people every where.’ That has been a gift of Facebook, connecting me with old friends. I can’t say enough about how the support at my shows has meant to me.

I have also been running into people in different places around town who want a CD and people who look for Wednesdays with Wanda. This also brings me great joy. I’m not sure of all the lessons but I am grateful for each person who showed up to hear me play and each peron who bought a CD, cup or a piece of my knitting.

Thanks for joining me on this journey!

In creativity and joy,